Latency, in computer networking, means the delay between preparing to send information and the start of the transfer itself. It was a term borrowed from biology, where latency is the delay between stimulus and response. The human brain sits in the pitch-dark cell of the skull, and responds to stimuli carried in from outside by nerves. Of course, the brain can also think, ponder and mull over ideas, without any input from outside.

Smile, and the shape of your mouth is turned into information by my retinas and transmitted a few centimetres into my brain through nerves. Touch my toes, and nerves carry news of the sensation nearly two metres. There is no reason, then, why the eyes should not be further from the brain. As a thought experiment, imagine the brain removed from the skull, but every single nerve remaining connected in exactly the same way, simply extended; perhaps by adding an artificially created section, grown in a test tube. The brain, now one metre from the body, would experience the world in exactly the same way as before, receiving identical inputs. Only the latency has changed, and then only slightly: if the brain is one metre from the skull, the latency of the signal from the eyes has increased, but it's still less than the latency from the toes originally was; no problem. The only difficulty in all of this is the sheer complexity, the vast number of nerves involved. But any amount of complexity can be handled by a sufficiently complex machine. Modern computers are easily complex enough to catalogue every connection, and medical robotics is advancing fast. Within a few years we may have robots capable of handling all the nerves in a body.

Now imagine we introduce a multiplexer, the same principle that telephone networks have used for years, allowing the signals from many telephones to be digitally combined and sent onwards over a single wire. Instead of an infeasibly thick bundle of biological nerves, every single nerve is connected to an electronic device which measures the nerve signals (their intensity and duration) and gives each a unique number identifying the individual nerve. All this information can be sent through a fibre-optic cable, to a demultiplexer which decodes the information and turns it back into nerve signals, transmitting them into the nerves which connect into the brain, each signal from retina or toe going to the corresponding original nerve.

And since the latency of fibre-optic equipment is far lower than the latency of squishy biological nerves, now there is almost no limit how far the body can be from the brain. The brain can be stored in a vault much more secure than the skull, with no change in its experience of the world, since its nerve inputs remain identical. Replace the fibre-optic cable with a low-latency wireless network, and the body can move freely again. Miniaturize the multiplexer – again only a question of mastering complexity – so that it fits inside the now-vacant skull, and nobody would ever know the difference.

You would see no blankness behind my eyes, for it is absurd to think that the presence of grey matter a few centimetres within is what makes the eye twinkle. Only a reticence to enter steel-reinforced buildings might give me away; just as fairies abhor iron, wifi abhors a Faraday cage. And that little question of latency, that tiny extra delay between stimulus and response. But then, I always was a little slow on the uptake. 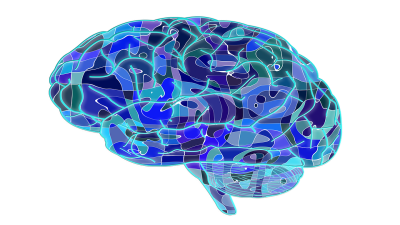 next:  invaders on the streets