It all started in July, when I took a photo of what appeared to be a space invader in the middle of a Union Jack, high up on a wall on Pink Lane. It seemed like art, but the meaning eluded me. The depiction of a space invader with mosaic tiles for pixels is certainly a neat idea, I thought.

Although, in fact, I probably only noticed the space invader because, the previous week, I had been to an exhibition called Game 2.0 at the Life Science Centre. I played a game of space invaders, among many others. It renewed my opinion that it was never a very good game. I always preferred Pac-Man, Defender and even Asteroids.

Actually, it really started last year. I wrote a few months ago about how I'm taking photos every day for my Instagram, and how one of the things I like about it is that it makes me notice what's around me more. Looking around (plus perhaps being primed by Game 2.0) is what made me notice the Pink Lane invader.

And then, gradually, I became certain I'd seen a different space invader, also high up on a wall, somewhere else in the city. I began to look specifically for space invaders, and noticed a similar mosaic, at a similar height, on nearby Stowell Street, though it didn't seem to depict a space invader type creature, more of an amorphous colourful blob. Then I spotted another, right in the centre of town within sight of Grey's Monument, definitely a space invader, and definitely in a place I've walked past dozens of times in recent months alone.

So hundreds of thousands of people are walking past these space invaders all the time, and probably, like me, either never noticing them or simply not giving them a moment's thought. Just another detail in the visually crowded city environment. If you were an invader from another place, building up numbers ready for an invasion, being able to hide in plain sight like this would be just what you might hope for!

I searched online, and found a report that there might be more than half a dozen more, perhaps put up by a visiting French street artist, democratizing art Banksy-style. It mentioned a number of locations and I visited them, finding invaders in some of them and not others. I felt sure I had seen one on Percy street, but walked along it with a friend, looking very carefully, and it turned out to have been a false memory. The next day, the friend found one near his workplace on a street I very rarely walk down. I found the web page of someone who had photographed over a dozen invaders in Newcastle, and while the exact locations weren't listed, I found most of them from the photographs.

I began to put in a lot of miles, walking around town, adding to my daily step count. Often the hunt for invaders gave me an excuse to explore corners of the city which I'd never been in, which is always a pleasure. I began to do more web searching, and found that the artist called Invader has a website which lists the cities invaded (78 so far), though not the invaders' locations. And it's not just cities - since 2015 there has been one of them on a wall in the International Space Station! I downloaded the official app which verifies invaders using the camera and GPS. As of today, I have found 19 of the 25 Newcastle invaders, and been to the site of one which is no longer there - it invaded a building (at the bottom of Pilgrim Street) which has been demolished, I established from seeing a photo of it.

At least until I find the remaining five, I have adopted space invader hunting as my hobby. What attracts me to it isn't nostalgia for the game, which as I said, I never rated much. But there's something iconic (see what I did there?) about what are now called "8 bit games". In the 1980s, we had to use our imaginations to turn patterns of bits into avatars with agency. I still think of them as Sinister Looking Alien Beings, as one computer magazine (Beebug, perhaps?) called them in the early 80s. If you don't like the idea of killing living beings (and I didn't, even then), the SLABs might be robotic creatures, AIs, which perhaps makes zapping them alright.

So for me, the attraction of hunting invaders is that it combines walking; exploring; treasure hunting (oh my! another memory from the 80s, Treasure Hunt on TV); and an appreciation for that era when a simple sprite could invoke a sinister invader for those willing to use some imagination. "A more civilized age", as Obi-Wan Kenobi might have put it. 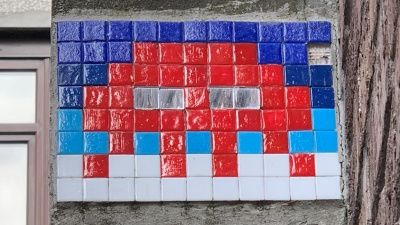