Virtual worlds have come a long way since I first got access to computer networks in the second half of the 1980s. MUDs were like the text adventure games I enjoyed (and had written a couple of on my BBC Micro), but better because you could interact with other people. Another thing which fascinated me was that some of these systems used interpreted code (like LISP) and so new puzzles could be added while players were online. I remember one MUD which I used to play in about 1988 announcing "Something in the world has changed" when the interpreted part of the system was reloaded. The rules have changed. If only real life had something like this.

For most people, the internet remained too slow to advance much beyond this, but as things got faster - and more and more people got access - Massively Multiplayer Online Games started to take off, mostly role-playing type games with conflict and fighting. Since "I'm not the fighting kind" I ignored these and spent my gaming time playing various versions of Sim City and later The Sims 2. They were both virtual worlds which were played offline, and there was no connection with other players, but Sims2 developed huge and vibrant communities of players, and marketplaces sprang up where one could obtain (mostly for free) all kinds of additional furniture and outfits for the doll's-house like game.

In 2005, just as broadband was taking over from dial-up modems, I tried Second Life with an eye to using it as a marketing tool for a company I was doing work for. However, I found the graphics too poor and the experience too difficult, and abandoned it, returning only in 2009. Linden Labs made the correct bet, that graphics and internet speeds would catch up with the idea; meanwhile, EA Games spotted the massive revenue opportunity of online marketplaces, and brought out The Sims 3, in which they controlled the marketplace, removing the anarchic community and wealth of free matierials in favour of heavy-handed corporate control. Added to the insufferable placement of in-game advertising and the breaking of some key aspects of Sims 2 gameplay which I had enjoyed, I abandoned the Sims for Second Life (SL), and I have been using it on and off ever since.

SL is obviously different things to different people. You can build houses (with vastly more creativity than in The Sims) and dress up your avatar in any kind of outfit imaginable. I think of this as SL-as-doll's-house and it's clearly incredibly popular: you only have to look at all the groups on flickr for SL screenshots, to see that almost everyone is heavily focussed on their avatar. (Even groups like "SL Landscapes", "Virtual Snapshots" and "SL Moments" are almost completely full of landscapes with an avatar in front of them, snapshots of avatars, and avatars having a moment.) This may be partly because of the way the UI works, but clearly "being someone else" - mostly a highly stylised young white girl with infeasible breasts or a 9ft tall young white man with improbable muscles - is a powerful idea for a lot of people. Not being connected with their real-life persona is also clearly important: at least 90% of users have the RL section of their profile either blank, or containing a message (often phrased pretty rudely) about how private, secret and totally off-limits information about their RL identity is.

Most sims are full of poses and dance-balls for couples, which suggests that besides virtual personal grooming, virtual relationships are the next most popular way of using SL. However, I see so few people using them that I can't help thinking that it might be just that sim builders imagine they are popular, or want to encourage coupledom. (There are also many opportunities for "virtual sex", for those so inclined.)

Either way, I find it frustrating to find so much of SL couple-oriented. Socialising in SL is very odd, even for someone like me who has been socialising on the internet for 30 years. There are many sub-cultures, some friendlier to outsiders than others, but not really much difference between them. I have three avatars: a man (a representation of myself in SL, with a ponytail), a woman (a young, slim woman since it's difficult to convincingly look otherwise), and a dog. Over many years, I have consistently found that it is very difficult to find anyone to talk to as a male av, and far easier as a female. I've only recently started being a dog - animal avatars are almost vanishingly rare, even now - and am finding that more people will say hello, but it has led (so far) to fewer in-depth conversations (still more than being a man).

In the early days of SL, there seemed more focus on getting everybody to build things. This has largely died back, as Linden Labs caught on (surprisingly slowly) to the idea that operating a marketplace where you take a cut of every sale is a vastly profitable (and scalable) way of making money. Their earlier plan was to make money through land rentals, which they incompetently managed, making vastly too much land available, resulting of vast swathes of abandoned land, because there's not much fun building something that nobody will ever visit. Nowadays the focus is on buying "content" - mostly clothes, just like in The Sims 10 years ago - made by expert content creators, and SL finally has a good marketplace. But this too is backfiring, as content creators close their in-world stores (where you can see the goods materialised and easily browse) because they're so much more expensive to run than simply having a presence in the web-based marketplace.

Considering the mind-boggling potential of virtual worlds, where you could be any kind of creature in any kind of space, SL still displays a staggering lack of imagination. Most users, who one guesses are young dwellers in urban environments, use SL as young human avatars in mostly urban environments. While there are some beautiful natural sims, it's still extremely rare to find one that's genuinely convincing, because they mostly still suffer from a number of problems:

I find the deserted and sterile nature of most of SL profoundly disappointing and lonely. What I've mostly enjoyed in SL is socialising, but it's hard work to find. Live music, which I've also enjoyed on occasion, has also become harder to find. I would enjoy exploring deserted places more, if they had more wildlife, or more robots, or more of something moving around autonomously and less of the "you're the last living being alive" feel.

Linden Labs are preparing a successor to SL, called Sansar. Their press releases so far talk a lot about democratising creation (without explaining how that's different from SL, which started off trying to do that - has it failed?), and about "experiences", whatever that may be. I hope it will mean more imagination, more avatars that are animals or droids or mythical beasts or just old or imperfect-looking people; and more ability to pose your avatar yourself, rather than relying so much on pre-made poses in pre-decided places. And I hope it will mean more AI, with autonomous creatures that can realistically behave like urban or wild creatures, pursuing their own agenda to make a backdrop rich with life, not just a chocolate-boxy view. And I hope it will throw people together, pack them into too little space and force them to find ways of socialising and pursing other goals within constraints, because it's challenging people that brings out the best in them. 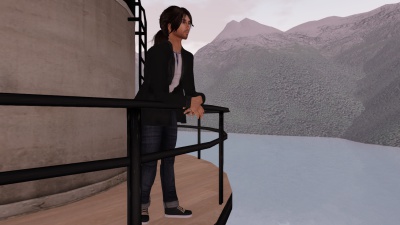 next:  cycling on TV