After a decade of living in the midlands, I realised that I didn't like it there and missed living in the North, the part of England that I come from. After a second decade, I was starting to feel desperate to move back, but it has taken another three or four years to succeed.

My partner noticed it first, commenting that every time we drove north, I visibly relaxed and looked happier once we got as far as the Lake District or the Dales.

Now that I'm back, I've noticed that the feeling that I was desperate to come back, has not turned into anything like joy at being here. We've moved so close to where I lived in the 80s, that I'm finding it very hard to notice how beautiful the countryside is; it is, but I'm just so used to it. Instead, the angst caused by the feeling of being “out of place” has been removed, leaving only the absence of angst - a feeling of things being how they should be; normal.

I suppose these feelings are related to patriotism. I'm a patriot, but not a nationalist - I love my country but not the nation that currently occupies it. Not only does England have a problematic past and a lot of nasty xenophobia going on at the moment, I think in any case it is too big and diverse for someone to be genuinely attached to the whole place. The part of it I love, “my North”, is the area between the A69 and the M55/M62 (the area between Newcastle, Hull, Preston and Carlisle). I think it forms a coherent homeland which could, in principle, have been a country in its own right.

This sense of coherence may come from what sociologists call habitus, the reproducing of social structure across adjacent social groups by mimesis, potentially leading to cultural norms across a region. The culture we live in shapes us and we propagate it. To me, the northern culture and the landscape it coincides with go hand in hand, they are aspects of a single amalgamated union. The north in which you can look up from an everyday drive and glimpse the peak of Coniston Old Man is the same as the north of redundant miners whistling Always Look On The Bright Side Of Life as they march out of their colliery for the last time, and the north where you can look at Hockney's paintings in Salt's Mill alongside the river Aire, and the north that likes chips for “tea”.

Like all countries, it's no more than a set of ideas that happens to exist in a particular geography. It's people who hold the ideas, yet the ideas can possess the people. People and place inhabit each other.

You don't have to believe that a place (whether it's a country or not) is better than other places to be a patriot; you only have to recognise that it's different. I think it's undeniable that the North is different. And so the North possesses me. 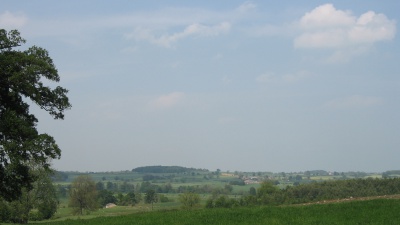