For 15 years near the start of this century, I had a kind of blog called a LiveJournal (LJ). It was like public blogs, in that you could post whatever you felt like in your own space, and have in-depth threaded discussions involving many people; but it was like Facebook in that you had complete control over which circles of friends saw what material. And it had a feature that I've never seen elsewhere on social media, called the lj-cut, which works like folding editors for code do: you could hide parts of your posts in these folds, which opened up if the reader clicked on them. So you could put long rants, or film/TV spoilers, inside the fold and let your friends decide for themselves whether or not to read them as they scrolled through their feed. It's very different from Facebook's control-freakish way of showing and hiding posts and discussions as it sees fit, rather than as you wish. Consequently, LJ was a much stronger community than FB will ever be.

Some of my LJ-friends died, some disappeared from social media, some went to DeadJournal, some to Dreamwidth, and some to Facebook. I think it's a shame we're divided; we were better together.

Anyway, here are a few short posts from my LJ that I thought worth saving.

I dreamt last night that the new water pipes in our loft were leaking. I had to go up there with a Java IDE to fix it. I was convinced that a T-joint was leaking water because someone had compared two strings with == when constructing it.

I am eccentric, you are a loony, he/she should be sectioned

Is it normal to be unable to do the vacuuming without singing “I want to break free”?

One day, a man was walking along a street when he happened to look over a fence into a garden. There sitting at opposite sides of a garden table were a man and a large dog, and on the table between them was a chess set. From time to time, the man moved a piece or the dog moved a piece, picking the pieces up delicately with its mouth and placing them back down precisely. As the passer-by watched, the man put the dog into checkmate and sat back, arms folded. The dog studied the board for a while then jumped down from the chair and trotted off into the house, tail down.

“Wow!” called the passer-by, astonished. “Your dog is incredibly intelligent!”

“Not really,” replied the man, “he hardly ever wins.” 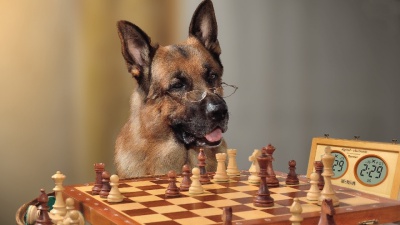