The language around sexual orientation has changed quite a lot over my lifetime. I regularly hear people around me, and in the media, use terms around gender and sexuality carelessly or wrongly, so I thought I'd put together a rough guide to the language of LGBT+, as terms are currently understood. This is a simplification which skims over the surface of many issues so as to highlight what's important.

Today happens to be the day of London's Pride parade and festival. The current organisation calls itself London Pride precisely to avoid using an abbreviation like LGBT which inevitably includes some groups and excludes others that aren't mentioned. Deciding what abbreviation to use is a divisive issue in the communities who come together for Pride.

The evolution of the LGBT+ movement almost exactly coincides with my lifetime. The defining moment, in retrospect, was the June 1969 Stonewall Riot, and it's that event which Pride events all over the world commemorate every June. In brief, in the 1970s the term “gay” as in “gay liberation” was widely understood to mean everyone who wasn't heterosexual. But by the late 70s, lesbian/feminist groups were organising strongly and the dominant terminology became “lesbian and gay”, to reflect the fact that gay men and lesbians, while both facing homophobia, face other types of discrimination that are different, such as sexism. This terminology was still widely in use in the late 80s and early 90s; in the 80s, my university had a “Lesbian & Gay Society” which I didn't join, since I wasn't gay; and I remember Peter Tatchell giving a speech at BiCon 1991 (the UK's annual conference on bisexuality) in which the terms “gay-and-lesbian” and “lesbians and gay men” tripped easily off his tongue but he never once mentioned the word “bisexual” to his mostly bisexual audience! By this time, university activists were becoming more aware of the need to be inclusive, and most often called themselves “LGB societies”. People were beginning to understand that inclusive movements are stronger; allies and consensus are what build support in the long run. However, to be inclusive, it's necessary to recognise that different groups face (more or less) different issues. Biphobia is real and I have experienced it, but there are people to this day who deny that it is a real form of discrimination. It's much like the way some white people deny that white privilege exists because they've never noticed it. Well, they wouldn't. Most often, privilege is about the absence of barriers; and absent things are hard to notice.

The fact is, bi and trans people were involved in the development of the movement from day one, but were often encouraged to downplay their identity for the sake of unity. This is in tension with the whole idea of pride in one's own identity, and was resolved by the commonest abbreviation becoming LGBT in the 90s/00s. This represents the four groups who have been most active in the political movement for equality over the last five decades, and current understanding of the terms is as follows.

Lesbian and gay are pretty simple, well-defined terms, but bisexual and transgender are more complicated (which might explain some people's discomfort with them). They are umbrella terms which include a number of different things; and increasingly, in the last few years, people to whom these differences are important have been speaking up.

Bisexual includes all of these, among others:

The other sexual orientation, not included above, is asexual meaning not sexually attracted to anyone. Bisexuality has long been seen as a spectrum, everything between exclusively homosexual and exclusively heterosexual; nowadays some people also see the variation from asexual to sexual as a spectrum, another axis if you like.

All of these are examples of sexual orientations. Sexual orientation is normally understood as describing what gender of people you might be sexually attracted to in the future, in the right circumstances. (This definition allows people who are in, for example, a monogamous relationship to describe who else they might, hypothetically, be interested in sexually.) But it depends on the definition of gender; so, actually, what is that?

Until the mid 20th century, the word gender was only used to describe grammar, and the assumptions that go into cultural understandings of gender went unexamined. The dominant idea in the Western world has been that there are only two biological sexes, and that there are two gender roles which correspond exactly to these, and that all people fit into this system. But it is now well understood that none of this is true.

Biological sex can be determined genetically, and while most people have XX or XY karyotypes, several other combinations are commonly found, including XXY (up to 1 in 500 people), XYY, X, XXXY and others. Also, due variations in gene expression, even among XX/XY people, not all bodies are clearly male or female. In most parts of the world doctors “assign” new-born babies to the gender they guess is closest; and often intervene surgically as soon as possible to make the body conform to one of the two socially acceptable genders. To be intersex means to have any of these normal physical differences from what society considers an acceptably normal body.

But it's also now well understood that gender means a combination of how a culture sees sex differences, and how sex plays into roles within society - so it's mostly about culture, not biology. Different cultures have different definitions of gender, and there were probably many more diverse systems in the past. In India the idea of “third gender” has always been recognised, in Thailand “kathoeys” are recognised as a distinct gender, in native American culture “two-spirit” people were accepted as being both male and female, and so on.

The ideas that gender is cultural, and that neither sex nor gender are as simple as they seem, are still ones that many people are hostile to. I can only think this is because some people hate complexity and would prefer that the world was as simple as it appeared to them in childhood, perhaps to save them the effort of empathising with people with different perspectives than their own.

The gender binary is the over-simplistic idea that there are only two possible genders. It's now widely recognised that transgender men and transgender women have a strong innate sense that their assigned gender does not match their internal gender identity. The medical profession most often calls this gender dysphoria currently, and there is evidence from MRI scanning that there may be detectable brain differences in individuals with this problem.

However there are also other gender identites, including:

I first started to meet people who identified as genderqueer and non-binary in the bisexual movement in the early 1990s (contrary to much more recent biphobic claims that bisexuals support the gender binary). Indeed, there have been transgender and genderqueer people involved in the bi movement since the start (or at least since the late 1980s, from my personal experience). Bisexuals and transgender people are perhaps natural allies, having been overlooked in the “lesbian and gay” movement of the early 80s; and perhaps, given the more nuanced understanding of gender which is required to understand the various forms of bisexuality and the various forms of being non-binary, it was inevitable that this had to be a later stage in the development of the political movement for recognition and equality.

There are those who suggest that, as we get close to legal equality for the LGB sexual orientations, and start to make real progress on transgender/non-binary rights, the abbreviation we use should become more inclusive. Some people use LGBTQI (lesbian, gay, bi, trans, queer and intersex). Some people have always pushed for queer to be used as an umbrella term for all gender/orientation minorities, so as to avoid unwieldy acronyms. I have met people who identified either their gender, or their sexual orientation, as queer, over decades. But not everyone seems to like the word.

More recently I've seen people suggesting QUILTBAG (queer, undecided, intersex, lesbian, trans, bi, asexual and gay). While I'm in favour of inclusiveness, I think it sounds too funny. If we want to be taken seriously, we need a serious sounding abbreviation, and that necessarily implies not extending it again and again to include whatever groups come to the fore. So I personally prefer LGBT+ as a compromise which acknowledges with the + that it doesn't include all the groups I've defined in this article, while remaining easy enough to say in serious political discussions.

The aim of every political movement is ultimately to become obsolete, once all its goals are met. The LGBT+ movement has made huge progress in my lifetime, and I look forward when society stops trying to police sexual orientations or impose gender roles on anyone. 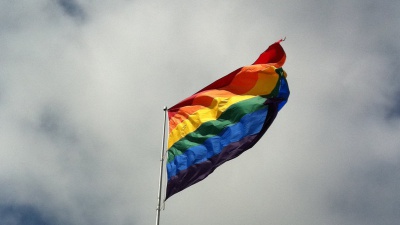 next:  passing by chance