When I think of this poetic line of dialogue from the Buffy episode Restless:

I walk... I talk. I shop, I sneeze. I'm gonna be a fireman when the floods roll back.
There's trees in the desert since you moved out. And I don't sleep on a bed of bones.

I'm reminded of this fireman (played by Sean Connery) from the end of Time Bandits: 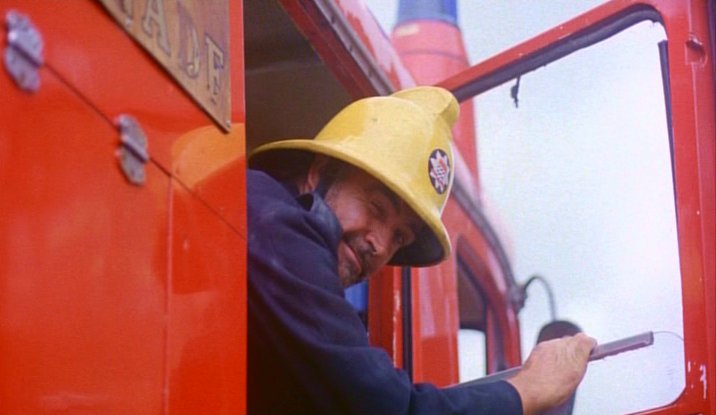 I don't think I ever had a phase of wanting to be a fireman when I grew up, but supposedly it is common among little boys. Strength, bravery, colourful uniforms, big machines and exciting rushing about – all good male stuff, right?

I didn't dream of becoming a software development manager either (and software start-up companies didn't even exist) but we choose jobs based on our abilities, temperament and above all, on what is in demand in the world at the moment. I understand software and I'm a good communicator and organiser.

Most little boys probably don't dream of working in a shop, either, but plenty of men end up in retail. Whereas I actually did dream of that for a while; I enjoyed playing shop and I dreamed of owning a sweetshop. It wasn't that I wanted to eat them all, but I liked the smell and all the colours. I drew pictures of how I'd organise everything: what would be in jars, what on the counter, what in drawers (in the 70s there were still full-service shops where stock was kept in drawers, though they were fast dying out, but that was the kind of shop I would have had). In hindsight I suspect the organising, working with people, and perhaps the being self-employed, were the things that attracted me so much. I also had a phase of wanting to be a publican, I think when I was 10. I wanted to call my pub “The Sappho, Sophocles and Homer” though as you can imagine I had only the sketchiest of ideas who they were.

I've been lucky enough to have a career doing things I wanted to do; I don't regret never having kept a shop (unlike my partner who dreamed of being an astronaut). But a world where everyone simply did what they dreamed of in childhood would not be a viable world. And so the fireman gives us a wink and rushes off to his next adventure leaving us standing here in the world we have.

next:  Byzantium as palimpsest