I chose the title of this blog (Flying Over Byzantium) because of a fascination I have with Byzantium, or more truthfully, with my internal image of Byzantium. Just as the term byzantine wasn't used until long after the empire had gone, there is now a version of Byzantium in the public consciousness which is only distantly related to the historical city of Byzantion. In this blog's about page when I say “Byzantium is a state of mind” that version is what I am referring to; though of course I was also referencing the Billy Joel song, which is about feeling a need to return to New York. And this in turn can be seen as referencing the well-known legend of Tannhauser; when Joel sings it comes down to reality, and it's fine with me cause I've let it slide he casts himself as the knight returning from Venus' land, in my mind at least. This sequence (from my About Page to the popular song to the popular myth) is an example of a palimpsest, each layer largely erasing the layer it depends on.

Byzantium, and cities like it, are palimpsests themselves, with layer after layer erasing, yet being constructed on, the earlier layers. While Istanbul is probably not as complex in its layering as some, like London, it's nevertheless one of the richest in symbolism, with some of the world's finest mosques built on the sites of Constantinople's churches built over Byzantion's greek temples. And the delight in colour and complexity in art which Byzantine art gave to both the western and Islamic worlds deepens this richness. When researching Byzantine history I discovered that it gave much more, too: for example, the Byzantine solidus was the direct ancestor of the Arabic dinar and the linguistic ancestor of a variety of money words such as shilling, sou, and indirectly soldier, since they were paid in solidi.

This illustrates that languages, too, are palimpsests, the English language more than most. This is one of the themes of my favourite poem sequence, Mercian Hymns by Sir Geoffrey Hill, who died last year. This is occasionally touched on explicitly in phrases like “Seasons touched and retouched the soil” (retouching is the process of improving by making small alterations), but many of the poems deal with the layered nature of history and language, drawing threads from the era of King Offa to the time of the author's childhood.

In my idea of Byzantium I take inspiration from Hill's personal approach to language and history through poetry, and also from W.B. Yeats' poems Sailing to Byzantium and the later Byzantium. These poems appropriate the historical city and overlay it with a personal mythology, the later poem also using the earlier as its foundation.

I've wanted to write my own poem about Byzantium for some years. I have accumulated what I call a ‘solution’ of material (from which my poem will be distilled) through historical research and some ideas of my own about the nature of place and art, and my relationships with them. But I have held off because I'm still discovering my relationship with art; and like many relationships, the discovery phase can last a lifetime. People are palimpsests too, later ideas and feelings often eclipsing those which went before, making them hard to examine.

Perhaps I should try to take a snapshot and retouch it afterwards. Or take a leaf from Yeats and write a first poem which tells, and only later, a second which actually shows. Whatever I do, when I build my own Byzantium poem, it will be on the foundations of Yeats and Hill. 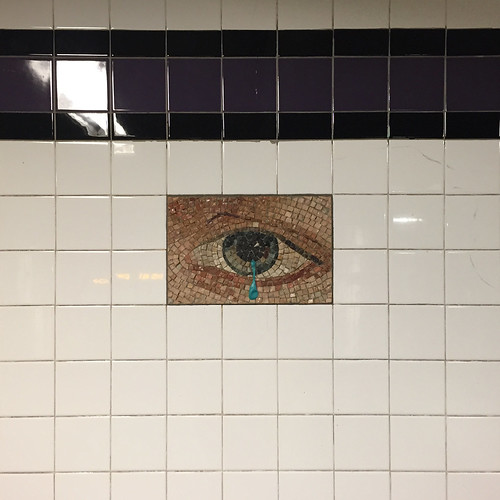 (photo taken in the New York subway; the mosiac aspect reminded me of Byzantine pavements and I made a series of photographic artworks based on this which are all on flickr; the top line of tiles, between two lines of black, is purple - a colour reserved for royalty in Byzantium) 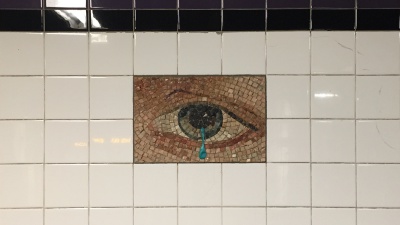