My flight landed at Siem Riep airport after 11pm. Seoul had been cool, but as expected, Cambodia was very hot and very humid, and the airport was crowded and noisy and a blur of colour. My driver and guide had a sign with my name on, the only time I’ve been met at arrivals that way, though I’d seen it happening to other people at a hundred other arrivals gates.

On the short drive to my hotel, there was nothing much to see but jungle, and a scattering of distant lights through the light, warm rain. The reception desk was busy, and my guide queued for me, allowing me to sit down with my suitcase. Around midnight, a group of young women, who I took to be cleaning staff, entered the lobby, and sat near the reception desk where they were called up one by one, and passed through into the office behind. One of them sat opposite me and smiled, and I smiled politely back, as I would anywhere in the world. The girl fidgeted, obviously wondering whether to come over and talk to me, but I gave no encouragement, desperate for sleep and with no energy to talk.

It was long afterwards that I realised that cleaning women don’t enter luxury hotels through the lobby, and hotels are cleaned in the middle of the day, not after midnight. I think those girls were there to be given some other kind of assignment by reception. Perhaps it’s because this was my first experience in Angkor that this is the first thing that comes to mind when I think about this trip, or else it’s because it was a human moment, while most of what I saw in Angkor was thousand-year-old carvings with hundred-year-old trees entwined among them.

For three days I drifted around the ancient city. A thousand years ago, it was the only city in the world with anywhere near a million people in it, a wildly successful Buddhist kingdom that’s still almost unheard of in the West. They built the world’s most sophisticated water management system and dozens, if not hundreds, of Buddhist temples. The largest temple complex, Angkor Thom, has an area of nine square kilometres, making the Forbidden City look provincial.

When I visited Beijing, the year before, I felt that lack of research meant I didn’t get the most out of my trip. This time, I had read thoroughly and knew a lot about the Khmer kingdom, but I hadn’t thought carefully about what time of year to visit. The rainy season was just beginning, and the skies were more often grey than blue. I still got up before dawn on the off-chance that I’d see the famous sunrise over Angkor Wat, but in the event, the skies were dull and most of my photos blurry from over-long exposure.

In hindsight, it’s clear that I was searching for something spiritual in the early years of that decade. A couple of years before I visited Angkor, I had been on a spiritual retreat at  the Harbin naturist commune in California, and the following year I went on a more serious retreat in a Buddhist temple on top of Mount Koya-San in Japan. While in Angkor, I went for a water blessing from a Buddhist monk. But although the temples of Angkor are stunning in their scale, and touchingly pathetic in their millennium-long struggle against the encroaching jungle, I found the idea of a successful Buddhist kingdom ultimately no more than a kind of intellectual curiosity.

Cambodia had entered my consciousness in the 1970s when the atrocities of the Khmer Rouge were mentioned on John Craven’s Newsround. It’s still a very poor country today, with people selling fruit from baskets at the side of mud roads. Amputees make paintings and carvings for the tourist trade, and some of the temples I visited are only metres away from live minefields. The street market I visited was more vividly colourful, at least in this season, than the jungle. I was taken out on a boat on the Tonlé Sap lake, where houses sit on stilts six or seven metres above the ground, because that’s how much the lake rises in the monsoon. They have nets slung under the floor, and when the lake is high, they can simply pull up the nets from the verandah and eat whatever fish have been caught.

I take all this as a reminder that, grand in scale as temples and cathedrals may be, religions can only ever seek to divert or manage the flood-waters of human desires, in particular to eat and to fuck. The fortunes of buildings, cities and particulour flavours of religion are tides that ebb and flow, and all buildings like individual people are forgotten sooner or later, but life goes on, with an inextinguishable continuity. And that humanist idea, that human life and thought is passed on forever, is how I understand the Buddhist idea of rebirth. Not as some spooky supernatural process like reincarnation (which plays no part in the teachings of Guatama Buddha), but in the tangible connection in my head from the etherial dancers envisioned by a royalty-appointed sculptor a thousand years ago, to the memory of the brown-eyed ‘cleaning girl’ smiling shyly at me under the dim lights of a hotel lobby at midnight. The passing on of live thoughts, ideas and feelings from one generation to another, that’s rebirth.

My room key was ready a minute later, and I didn’t stay up until midnight again: I arrived exhaused, and stayed exhausted for my whole time in Cambodia thanks to spending long days picking my way through the jungle and over the ruins of Angkor. But perhaps the sculptor of a thousand years ago and I – perhaps both far from home – after dining on fish from Tonlé Sap, both fell asleep and dreamed of rows and rows of heavenly dancers, doing their exuberant sexy dance before disappearing off into the hot, humid mist. 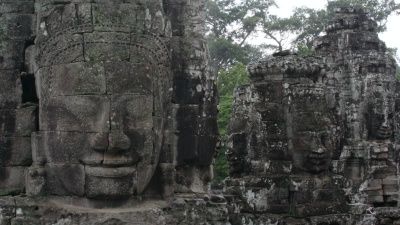 previously:  it won’t be easy