Nowadays everyone seems to take professional driving lessons, but when I learnt to drive, I didn’t have any money. Instead, my dad taught me, in our slightly rusty Peugeot 304. He was a good communicator and knew how to explain things in ways that I would understand, and by the time I was 18, I had my full license. Having moved back to the area where I grew up, I regularly drive along the road where I had my first ever driving lesson, so I’m often reminded of it.

The 304 wasn’t an easy car to drive, with its four forward gears, manual choke, lack of passenger-side mirror, and terrible rear-end visibility. But once I’d mastered reversing round a corner in that, I could do it in anything.

When he was teaching me how to approach blind bends, the technique he taught me to judge the maximum speed to take the bend at, was this: imagine a crashed motorcyclist in the middle of the road, just out of sight round the bend. Always take bends at a speed where you could stop before you hit this imaginary motorcyclist. On the twisty, bendy rural roads around here I still heed this advice, picturing a motorcycle in the road, just round the bend.

Of course, it could just as well be a sheep (more likely around here), or a stray dog, or a toddler, or a perhaps cyclist doing the Walney-Whitby route. But I still picture a motorbike because that’s what Dad taught me to do, 35 years ago.

Recently I mentioned this in a conversation when my mum was present, and she told me something I never knew: that this had actually happened to them. Dad was driving their first car, an ancient Singer Le Mans, and came round a bend and there was a crashed motorcyclist. It had never occurred to me that Dad’s advice had come from lived experience: I imagined it was just a vivid image invented for my benefit. Unfortunately, the biker died, but at least they didn’t hit him.

I don’t know anything about who he was or why he came off his bike that day, or why Dad chose not to mention that his scenario came from experience (maybe he would have told me eventually, but he died the year after I passed my test). Still, much as I enjoy driving my sports car fast, I never go round bends so fast that I couldn’t do an emergency stop if there’s something in the road just out of sight. My father’s advice could yet save a life. And perhaps this advice also applies to the metaphorical bends in the twisty road of life. 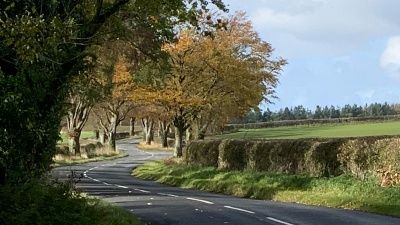 next:  oh no, not all this again