When I got a my first full-time job, at Birmingham University, it was the second time that I'd moved from northeast England to Birmingham, because I did my BSc at the same university.

I had wanted to move back to the northeast throughout my 40s, but I never imagined that I would ever live in Newcastle again. When I moved back there at the age of 50, to pursue an MA, it was the second time that I moved from the midlands to the northeast, because I did my PhD at the same university.

I had only been away from Birmingham for 4 years, but hearing the chimes of Old Joe – especially after dark – made me feel strangely nostalgic. I had lived within hearing of them in a formative time of my life, one that seemed far back in the past. I had changed a lot in 4 years, and so had my life. More confident, and more lonely, as I noted in a poem (see below).

I had been away from Newcastle for almost exactly 25 years, and at first, all kinds of things made me feel nostalgic, though never quite so intensely as those clock chimes. There are some things I miss, such as the big Co-Op on Newgate Street and the Cochrane Lounge in the student union. Many things that I liked are unchanged, like Rosie's Bar and the Metro trains. I found more examples last week, when I went for a walk that took in (for the first time since I moved back) Jesmond Dene and Heaton, where I lived when I first moved to Newcastle. The street I first lived in is unchanged, apart from the bare-floorboards off-license having become a trendy-looking little bar called ‘The Butterfly Cabinet’! At one end of the street is a modern church; just round the corner at the other end is a working men's club, and beside it, a little shop which sells surplus office furniture. It was there in 1989 and – amazingly – it still is. I hadn't given this shop a single thought since I moved out in 1990. I can't imagine how either the margins, or the volume of sales, can be enough to make this business profitable, but I suppose it must be, and it must be someone's life's work.

Life goes on, when we leave a place, and sometimes it carries on unchanged for decades, unheeded, sustained only by the tendency of things to carry on regardless. And then when you circle back round, you find nothing has changed about something that you didn't even know you remembered.

Here is the poem I wrote when I moved out of that street. I'm not at all proud of it as poetry (it's in the flat, Larkin-influenced voice I developed in my early 20s), but it's interesting that I foresaw how dividing up my life into stretches living in various places would be one of the main ways I would account for my life, looking back in my 50s.

The piled-up dusty boxes stand
like milestones guarding the end of one
more stretch of my life. So strange how
I recall the layout of each flat
so vividly, its rooms and views
– and with these images, the smell
and feel of how life was those days
already years ago. But for
how long – leaving this flat, the fourth,
I leave behind another seven
months, times I'm sure will fade.
Another one per cent of my life.
This silence which I savoured, now
seems oppressive, and the bare
walls expose their cracks – like those
cracks which now adorn my life,
dividing some parts from others, but under
the laminate of confidence
– and loneliness, staring out
from dark windows. The door shuts
with a certain sudden clunk I never
noticed before. Or needed to.
I walk away, not looking back;
it wasn't the best one per cent,
and probably not the worst.
One day I may be grateful for
these markers showing where the
long lost years were spent. 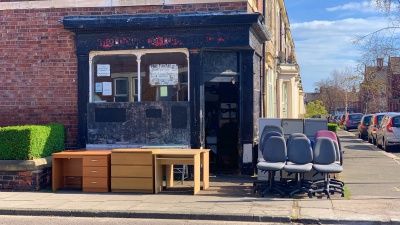