I was interested to read a news story the other day (July 2018) warning that town centres could become ghost towns because experts have been warning that this was going to happen since the building of the Gateshead MetroCentre in the mid 1980s.

The homogenization of the high street was accelerating by the 80s, and by the 90s, every town centre looked much the same: WH Smiths, M&S, Boots, Greggs, Waterstones, HMV, Card Factory, Clarks and six or seven other shoe shops, almost all selling absurdly cheap and badly made shoes. Eventually, around the millennium, the tide of shoe shops receded (I suppose they consolidated) just as the tide of mobile phone shops was on the rise. There was little point visiting one town over another any more, especially after Virgin collapsed and Waterstones gobbled up Dillons and put almost every other independent bookshop out of business.

Meanwhile, out-of-town shopping centres had exactly the same set of shops, but larger branches with more stock, and free (or easier) parking. By 1990, city centres were beginning to decay (including Newcastle, as a result of the MetroCentre) and empty shops were starting to result from city centre rents failing to adjust to demand.

This is still happening: an example close to me is Scotch Corner Designer Village, a huge retail park being constructed just outside Darlington, while in the centre of Darlington there is dismay that Marks & Spencer, one of the last remaining department stores, is to close soon. M&S is seen as an anchor store which brings in shoppers who then provide passing trade for dozens of smaller retailers, and all of them provide tax income (through non-domestic rates) to the council. The council also presumably makes a modest income from its tiny, expensive, difficult to reach car parks, while the Designer Village will offer free parking just off the motorway and free wifi throughout.

M&S is also closing in Stockton, mentioned in the news article as one of the first places to follow Bill Grimsey's radical recommendations. Stockton is having some success in abandoning the traditional retail-centric town centre, and transforming it into a mixture of public ameneties, eateries and other leisure facilities, and housing. This is fascinating because I don't remember any such strategy ever being suggested in the 80s, when the market was expected to cut rents to attract flagship chains back; and councils rarely did much more than introduce park-and-ride schemes to alleviate the lack of car parks in our Victorian town centres. (Since the ideal user of the park-and-ride was someone who never bought anything heavy or awkward to carry, such schemes always had limited popularity.)

Small is beautiful, of course. Turning department stores into apartments is an inverventionist strategy, but one which addresses the housing shortage; slows the tide of green-field housing estates with no retail or leisure facilities; promotes low-impact, car-less living; and helps smaller retailers by providing them with local customers in the absence of flagship stores.

Although this sort of scheme has obvious political attractions for the greens (community centres with all facilities within walking distance) and the left (diverse, multicultural, high-density communities have always been their natural environment), there is some suggestion that such a radical and necessarily interventionist strategy might not find favour with the right. But if "retail chiefs" such as Grimsey and Andy Street are in favour, local conservatives might well follow. Conservatives have always praised free markets in principle, but in reality they have always supported huge taxpayer-funded subsidies to the industries they like best (such as farming), which suggests that intervention might be favoured when it becomes clear enough that the market is going to destroy the town centres surrounding their town halls. So I think the repurposing of town centres from big-retail facilities to community centres could be a solution which works for everyone. 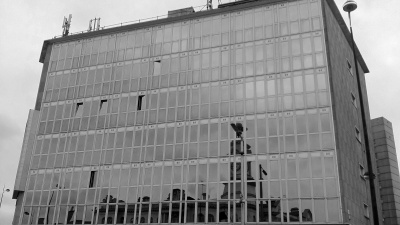 previously:  spaced out on synths