Some of my social media contacts have recently been playing with a political co-ordinates test. It asks 36 questions and sorts you onto a two-dimensional grid, where the two axes are Left/Right and Communitarian/Liberal. It gives some examples of political leaders, which gives away its US-centric view of political philosophy: 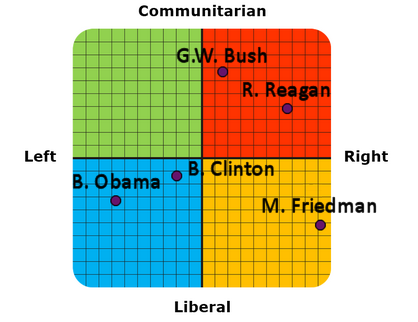 I came out as a left liberal, but far down the communitarian axis which surprised me, because I answered questions in favour of unions and universal healthcare, which are as communitarian as you can get. Not only does their example not have anyone in the top left quadrant, it appears the test is incapable of placing anyone there.

In any case, I don't think the terms Left and Right are very useful any more. It should be clear to anyone that they're culturally relative: they mean different things in different places, and have meant different things at different times. The whole American political spectrum fits in what would be called “right wing” in Europe. For example, the graph above puts B. Obama far to the left, but as I understand it he's in favour of healthcare being provided by for-profit private corporations, which is a view only held on the far right wing in the UK.

And I definitely don't think Communitarian and Liberal should be an axis, implying that they are somehow opposites. I believe that liberty and equality are co-dependent; you can't guarantee either one without the other. The opposite of liberal (meaning an emphasis on liberty) is authoritarian, and the opposite of communitarianism or socialism (an emphasis on social justice) is commercialism or corporatism, where the rights of corporations to hoard wealth are given more emphasis than the needs of individuals. So you can be a communitarian liberal or a liberal socialist.

So I suggest an alternative political co-ordinate system which looks like this:

(I don't necessarily stand by where I've provisionally put all those politicians, especially the US ones - I'm not an expert on US politics. And some politicians, notably Cameron and Trump, have been inconsistent in their political positions, as though they don't actually have a political philosophy.)

One could add Left/Right back in as a third axis, but that would make it harder to understand and reintroduce that historical/cultural baggage.

I'm aware that this system doesn't encompass all kinds of political views; it's mostly about emphasis in government, and doesn't cover political ideas about rejecting government (for example kinds of autarchism such as anarchism and libertarianism) or rejecting capitalism. But it's a way of thinking about the Western political mainstream that I think works better than the one proposed by that website, even though they claim their test was designed by professional political scientists. They also claim that it's agenda-free and I'm sure it's not; I don't believe it's possible to devise a narrative of political philosophy without one. Obviously I'm not a political scientist, and I came up with these axes after 10 minutes of thought this afternoon, so I reserve the right to change my thinking. 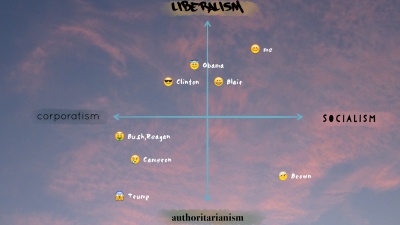 next:  then again, who does?