If you search the web to find out about the Fabian Society, among the factual websites you will find a number of web sites aimed at alerting the world about the dangers of socialism, and especially about Fabianism.

They all talk about the origins of the Society in the 1880s, and many of them provide detailed quotations from pre-1900 members of the society. Among these I noticed this, from Bernard Shaw:

Socialism means equality of income or nothing... under socialism you would not be allowed to be poor. You would be forcibly fed, clothed, lodged, taught, and employed whether you like it or not. If it were discovered that you had not character enough to be worth all this trouble, you might possibly be executed in a kindly manner; but whilst you were permitted to live you would have to live well.

This seemed unlikely to me, so I looked into it. It's insanely difficult to track down the provenance of quotaions using Google (the web is swamped with websites offering quotations, but most of them make no attempt to properly attribute quotations, or indeed check them in any way, resulting in endless misattributions which come up as top hits on Google). But when I found it, this quotation turns out to be from The Intelligent Woman's Guide to Socialism and Capitalism (1928). The date is significant not only because it was a time when some on the left still thought of the Nazi so-called “national socialism” as more about socialism than about nationalism, but also because at this time, not only was GB Shaw no longer a member of the Fabian Society, he was actively criticizing it in the press.

So as evidence of the intentions of the Fabian Society, this sort of thing is exceptionally ineffective:

Normal people understand that the policies of all political groups change over time. For example, going back to the Nazis, nobody accuses the Conservative Party or the Queen of secretly supporting fascism just because Winston Churchill (a leading Tory by any measure) openly supported Mussolini and there is a childhood photo of the Queen doing the Nazi salute. Over the space of decades, people change their minds, and political parties, just like individuals, are continually reborn.

The inescapable conclusion is that people who publish anti-Fabian websites are not normal people. These are websites - by definition written in the last 20 years - so surely they should take into account what the current incarnation of the Fabian Society says on its own website? But instead they hold up things that were written in the 1800s. I can only think they must just love conspiracy theories to spend their time and energy writing these websites. 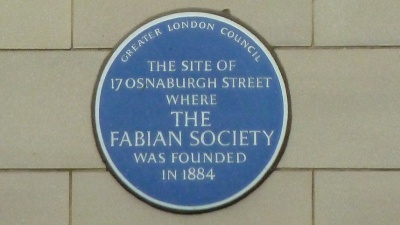 previously:  then again, who does?