OpenStreetMap (OSM) is a work in progress, and always will be. All maps which try to keep up with the world as it changes are.

When I first started contributing to OSM, in 2009, the town where I went to school, Barnard Castle, had just three features: a marker for the place name, the A67 road and the river Tees. Whorlton, a small village nearby where I used to walk the dog occasionally, wasn't on the map.

A few years later, every street in Barnard Castle was mapped, and every rural road in Teesdale. But Whorlton, a village with a population not much over 150, had only its green, its two named roads, its bus stop and its pub. OSM has always been good on pubs.

Since moving to live in Whorlton a few months ago, I've been working on improving the map. I've walked all the footpaths, traced buildings from aerial imagery and added the address of every property in the village (except one, probably an apartment, which I can't find). Lately I've been adding the surrounding farms, field boundaries, and more details like where footpaths have gates and stiles.

I've always enjoyed getting to know an area (when I visit a new city I almost always walk around it to get a sense of its geography). Because Whorlton is so small, it's been feasible to translate all this local knowledge into the map, making OSM the most detailed map available.

There's a lot missing in OSM - but not in Whorlton. Even so, OSM is a very usable map. If you want to walk there on the Teesdale Way, have a drink in the pub, then catch the bus back, it has everything you need: 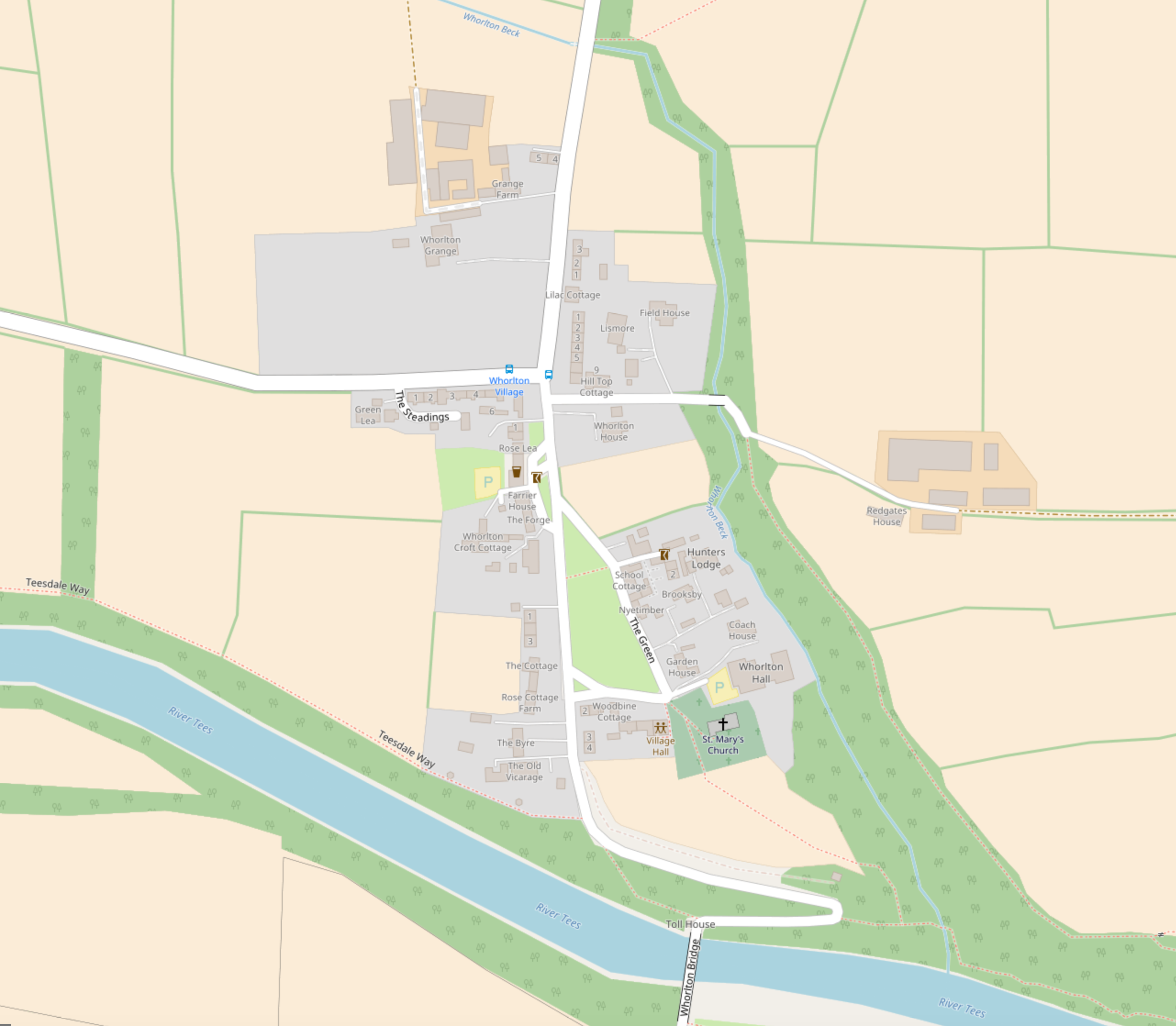 map “© OpenStreetMap contributors” (including me)

OSM compares favourably with Ordnance Survey, which has had a 250 year head-start, and Google Maps, which has the global resources of a famous Cayman Islands based search engine behind it:

OS is good on footpaths and boundaries, but devotes a lot of space to place names like "Whorlton Banks" which I've never heard used locally, and is covered with numbers. It does have contour lines and all the streams. The presence of a pub is indicated but not which building it is, and the bus stops are missing.

Google on the other hand has the bus stops (though not their names), but shows no pub symbol and footpaths are completely absent. Rivers, even though they are of no practical use to the map user, are shown intermittently and so are some buildings, though many are inaccurate or just missing. Business names, though, are shown, even where they are based in private houses. They're frequently in the wrong place (usually postcode-based), but in Whorlton I've submitted corrections to Google, Bing and Apple Maps, to move all the incorrectly-placed markers.

And with OSM, because of my recent work, if you want to find any house in the village you can. This is a challenge, because many of them have no street and no visible name sign (not unusual in such a small place). We constantly get mis-addressed post and parcels because of this - some couriers evidently just get fed up with looking and post things through the first unlabelled door they find. Experiencing this motivated me to add all the addresses to OSM.

I've always found getting to know every nook and cranny of a place fun, and I've always enjoyed looking at maps. Mapping Whorlton has combined these together with being able to share my knowledge. I hope others find it useful, but if not, it was still fun for me to do. I plan to keep going, expanding outwards from Whorlton making OSM the most useful map of my home area. (And by the way, it's free!)

next:  more of the same