Returning to Newcastle 25 years after living here has been a disorientating, disconcerting experience. Walking down familiar streets, there are unfamiliar absences (like the Odeon, whose site now has a temporary container village on it) and presences (all of what used to be the university's car parks now have enormous buildings on them); and in some cases, which is even odder, buildings that I can see are new, but I can't for the life of me remember what was there before.

Some absences are sad. The big CoOp department store, with its lovely art deco frontage and towers, has been broken up into smaller things. The Student Union has changed a lot: the men's bar and the smaller bar on the right (what was its name? I spent a lot of time in there) have gone, and the venerable wood-panelled debating chamber, with its raked seating, has been ripped out to make way for apparently desperately-needed office space. Do students really not debate things, any more?

Much of the town, even close to the university, is simply new to me. In four years here, I never walked over to Leazes Park, and I never saw the remaining section of city wall at the back of Stowell Street, or the medieval squares and cobbled streets of Grainger Town. Yet I discovered them within days of being back here. I did what I do in any new city: I walked around to see what I could see. I've done this in cities all over the world, from America to Australia, and in every country in Western Europe from Porto to Warsaw. But apparently I did not do this in my early 20s. It seems at that age I simply picked an efficient route from A to B and followed it, like a robot. At what age did I stop doing that, and become an explorer? 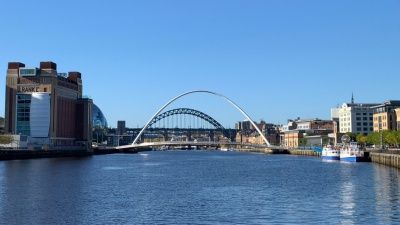 next:  the bloom of sodium lamps