One of the memories which come to my mind related to Nelson Mandela, who died on Thursday, is from the 1990s: a work colleague regularly wore a FREE NELSON MANDELA teeshirt, but since the man had indeed now been freed (and elected President), rather than throw it away he had altered the first line with permanent marker to say FREED.

What made this stick in my mind was my colleague's continuing devotion to his hero. When I was developing my political awareness, in the early 1980s, Mandela had already risen to this level of hero-worship on the left because of his socialist ideals. Acknowledgement of his greatness is now universal, happily, but faced with wall-to-wall media coverage of his life and death for the last couple of days I find I'm unsatisfied with the lack of acknowledgment that some of us knew he was a great leader in 1984. I now realise this is probably the same feeling that my co-worker had in 1994.

For example, the British Prime Minister, in a speech loaded with superlatives, described Mandela as a “hero of our time”, but failed to address the fact that in the 1980s, his party bitterly opposed Mandela's movement. Margaret Thatcher strongly opposed sanctions and called the ANC terrorists; many of her MPs (and Conservative students, which is how I remember it so clearly) went further and called for Mandela's execution.

I also looked on the website of Barclays Bank, notorious for continuing to operate in South Africa under apartheid, to see if they had anything to say. This too was a big issue among students when I was at university in the 80s. They published a press release with a very gracious tribute to Mandela's “leadership” but also completely failed to mention their own opposition to it at the time.

My concern is not because I want to be able to say “I told you so”. Oppressive governments are still around today. David Cameron opposes boycotting Russia over its oppression of gays, and Barclays continue to operate in Zimbabwe, ignoring the EU sanctions against giving financial aid to this pariah state.

Overcoming poverty is not a task of charity, it is an act of justice. Like Slavery and Apartheid, poverty is not natural. It is man-made and it can be overcome and eradicated by the actions of human beings. 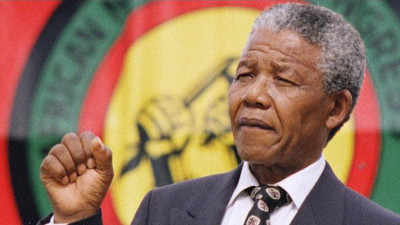 next:  can't hear you