I took this photo of a sculpture on the Singapore River in June, but found it a bit uninteresting, so I didn't post it to my flickr until October when I made this treatment of it with TangledFX. Yesterday it reached over 1,000 views, which is astonishing compared to my past experience of flickr. It's already my 6th most viewed photo (from 2,200 photos posted over 6.5 years) and my most viewed photo has less than 2,000 views after being up for 4.5 years.

I had often noticed in the past that photos where you can't see the details in a thumbnail tend to get more views, presumably as people click through to have a better look. But that effect on its own can't explain this photo's popularity. It's obviously mostly down to flickr's redesign in the summer - since then, my photo stats have been massively up (before, typically 30-40 views/day; now, typically 250-300 views/day, and almost all from flickr - if anything, views from search engines are down).

After several years of stagnant design, I welcomed flickr's big redesign, not least because they fixed the problems that made their "continuous scoll view" unusably bad on firefox. They introduced some new bugs, and I'm a little frustrated that they've been busy adding more features since then rather than fixing the bugs. Evidently the larger versions of photos shown in groups and friend feeds count as a photo view now, wherease the thumbnail view before, didn't; that's the only way to explain the big upsurge of views I'm seeing.

I like the new homepage view and view of a group or a person's photostream. I don't like the default view of my own photostream, because I want to see the upload date and comment count at a glance, without having to hover; happily the "Edit" view still provides this. I'm less sure about the groups list page. The big icons are nice, but when you're a member of hundreds of groups it makes finding a particular group harder, even in alphabetical mode. The "new photo view" is still a bit half-baked; comments are squashed and you can't see who faved a photo. But they're still improving it. The new desktop uploader still sucks and I just use the original, basic one. At least it lets me choose the order photos appear in my stream.

There were two things about the flickr redesign which I thought were revealing about Yahoo's thinking about flickr.

Firstly, maps are far less prominent now. Every geotagged photo used to display a map, but now they don't and you have to really want to find the option to add a photo to a map (though of course phone photos will mostly be geotagged already). Yahoo invested a lot in their maps and geotechnology in the past but now they seem to have lost interest, just as the mapping between Google and Apple is escalating.

Secondly, the decision to discontinue $24/year Pro accounts is interesting because the new "ad-free" accounts are $50/year, despite not having all the Pro features (stats, private access to original images, removal of the daily upload limit). That they will make a profit on the ad-free accounts tell us that they expect to make close to $50 per year per user from displaying the adverts.

They've improved the flickr phone app too, but it was so bad for so long that I've never got into the habit of using it. I much prefer FlickStackr for browsing, especially on the iPad. 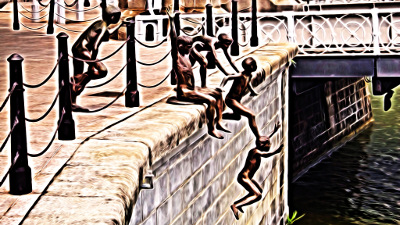 previously:  the railroad not taken